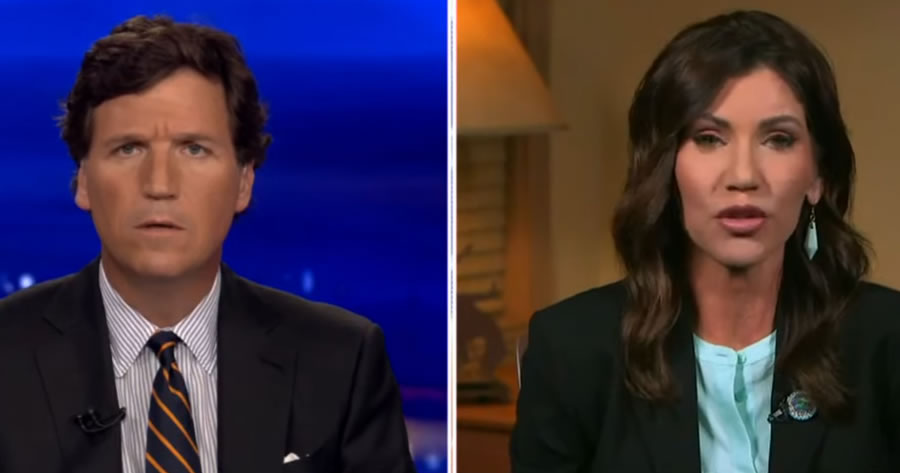 Carlson question if Noem had caved to the NCAA by not signing the bill into law. Noem argued such legislation, if made law, would make her state vulnerable to legal action, as well as punitive action from the NCAA.

CARLSON: There’s been a big push nationally — the Biden administration is squarely behind it — to allow biological males to compete in girls’ sports. We’ve covered it extensively on this show. It’s very unpopular with the public.

It’s particularly unpopular in the State of South Dakota. South Dakota is one of the most Republican states in the country. Republicans essentially control the entire state.

So Republicans in the legislature there recently passed a bill to prevent this from happening, to prevent biological men from playing a women’s sports teams and the Governor of South Dakota, Kristi Noem, who you doubtless have seen, said she was, quote, “Excited to sign it.” Now, she has changed her mind.

Governor Noem joins us tonight to explain why she has. Governor, thanks so much for coming on. I appreciate it.

So here you have this bill, which I think all polling shows is popular in your state. I think it will be popular nationally. You said you were excited to sign it. Big Business intercedes, NCAA, Chamber of Commerce, and Amazon then tell you not to sign it and you changed your mind.

I think a lot of our viewers are wondering your thinking on this and how exactly this happened.

NOEM: Well, that’s not true, Tucker, and thank you for inviting me to be on the show tonight.

I could sign the bill the way that it is today, and then also –b but it wouldn’t solve the problem. And that’s the real issue.

As I looked at the bill and examined it and have been discussing with legal scholars for many months on how to protect women’s sports. This bill would only allow the NCAA to bully South Dakota, and it would actually prevent women from being able to participate in collegiate sports….