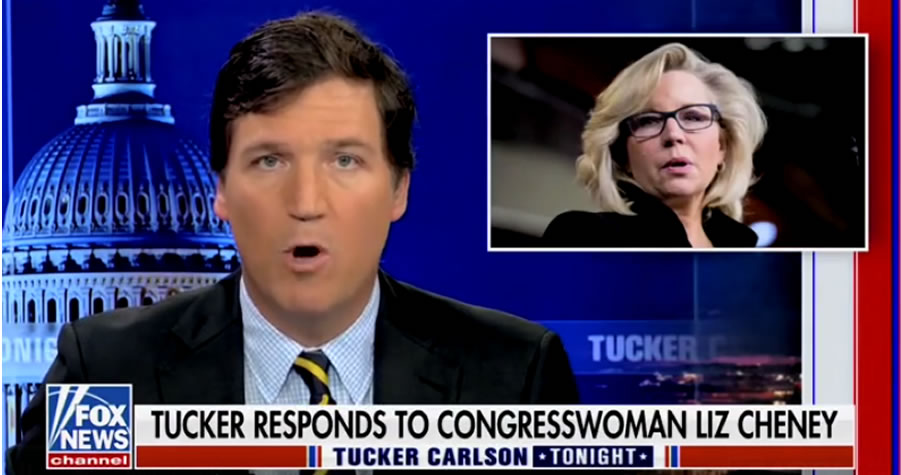 Fox News host Tucker Carlson did not mince words in responding to U.S. Rep. Liz Cheney panning his network for allowing him to spread lies about the January 6 protest at the U.S. Capitol.

Highlighting a tweet from Cheney, Carlson said, “So last night, we showed you a trailer for something called “Patriot Purge,” our new investigative documentary on what happened on January 6th, it debuts Monday on Fox Nation. This morning we woke up to this tweet — it comes from Congresswoman Liz Cheney, of suburban Virginia, who for some reason represents the state of Wyoming in the House.

After reading her tweet aloud, Carlson sarcastically added, “At the bottom of her statement, Cheney made her point explicitly, ‘Make this man stop talking, de-platform his show at once.’”

“That was the point of the tweet and it was pretty amusing to read it,” he added. “This is not CNN. We work for Fox News. Our bosses don’t pull people off the air just because some screechy little politician does not like what we say. Sorry, Liz Cheney. Keep in mind that Liz Cheney has not even seen the film she is so angry about, just the trailer. A minute and 42 seconds pulled from three full episodes. Liz Cheney is not waiting for the facts here. She knows for certain we have weapons of mass destruction, and she plans to invade. According to Liz Cheney, this show is dangerous. Because we have dared to report on what actually happened on January 6th, this show is somehow, she says, abetting violence.”

The Fox News host explained that if that argument sounds familiar, that’s because it’s “a staple of those hysterical, purple haired college activist you see yelling at people in viral videos, ‘Your speech is violence.’”