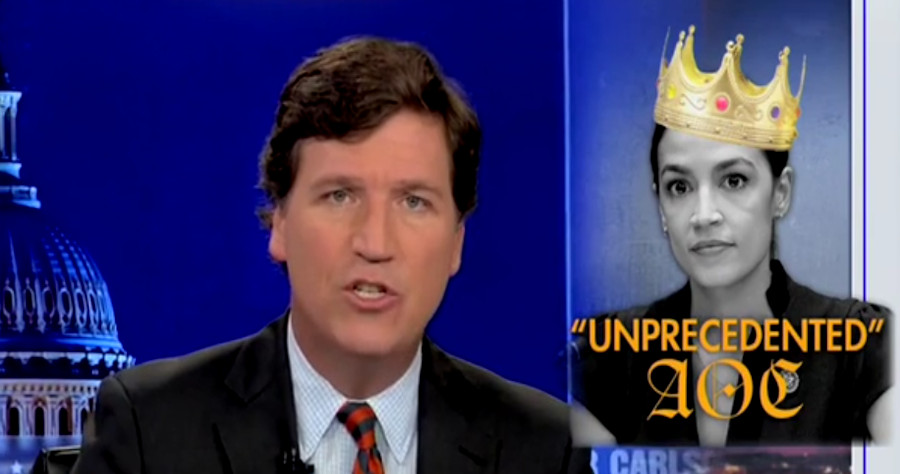 Rep. Alexandria Ocasio-Cortez missed her chance “to win the Nobel Prize” according to a new book from New York Magazine that Tucker Carlson panned Friday.

At the open of “Tucker Carlson Tonight,” the Fox News host pointed out that there was more to talk about regarding situations in Canada and Ukraine, but his team had gotten their hands on a new book about Ocasio-Cortez (D-NY), “Take Up Space: The Unprecedented AOC,” and they couldn’t help but review it.

Calling the team of authors who assembled the book “fan girls” who compare AOC to “Jesus” before suggesting her placing second in a high school science fair meant she could have won a Nobel Prize, Carlson introduced the first excerpt as read by his producer Alex McCaskill, “To say she is a feminist is to understate the facts. Ocasio-Cortez is the first politician in history to live fully out loud while female. And the degradations of womanhood are personal to her.”

“What exactly does that mean?” Carlson asked. “Is it a ‘trans’ thing? Honestly, we don’t know, she’s definitely loud.”

However, Carlson had more clarity on the “degradations of womanhood.”

“No one has done more personally to degrade American womanhood,” than AOC, he said adding, “she is neurotic and silly.

She is far more frivolous than any 1950s housewife ever was.”

Denoting that at least June Cleaver made dinner, Carlson asserted all AOC does is put “on makeup while talking about herself,” before a clip was aired of her doing just that.

“It is so hard to be taken seriously,” Ocasio-Cortez lamented as she began touching up her eye shadow and continued, “sometimes it feels like you have to jump up and down for anyone to listen,” and people try “to diminish my voice as young, and frivolous and unintelligent.”

Carlson couldn’t help but laugh at the claim, saying, “They don’t take me seriously when I put on eyeshadow. People are calling me unintelligent just because I’m dumb. That’s pretty funny.”

“The funniest thing of all was hearing Sandy Cortez describe herself as a woman of color,” Carlson emphasized. “She often does…and every honest person knows it is hilariously absurd.”

Referring to her as a “rich, entitled, white lady” and the “pampered, obnoxious, ski bunny in the matching snowsuit,” Carlson contrasted the “teeming favela” the authors behave as though AOC arose from to “save the world’s poor” to her reality as a “credentialed member of the overclass.”

The segment went on to discuss how the book portrays Ocasio-Cortez as somehow saintly because of her appearance that “conformed to society’s conventions.”

“She could have been a model for a skin-care line, and that’s why she’s such an amazing political leader – because she’s so pretty,” Carlson clarified the book’s claim. “Imagine a man saying that,” he added of New York Magazine objectifying AOC.

“It make you wonder what would happen if one day she gained 100 pounds and got eczema on her nose and forgot to trim her ear hair? Well, you know what would happen, “Carlson admitted. “Her political influence would evaporate instantly. She’s not the leader of an ideological movement. She’s a living marketing campaign.”

Carlson closed out his commentary on the book by pointing out the narcissism of Ocasio-Cortez behaving as a reality star filming herself doing mundane things like assembling furniture, another highlight of the book. The writers referred to it as shining “a bright light on her own complicated, multifaceted self,” and that the video of her alone in her apartment had no agenda. It was just AOC, “as if she were exhausted and wanting to talk. ‘I’m alone today,’ she says, pointedly at the camera.”

“I’m alone today,” Carlson reiterated the line. “Is it just us, or does that sound like an invitation to a booty call? Maybe one step from, ‘What are you wearing?’ Either way, it’s a little strange.”

Ocasio-Cotez responded to the remarks on Twitter, calling Carlson a “creep.”

Remember when the right wing had a meltdown when I suggested they exhibit obsessive impulses around young women?

Well now Tucker Carlson is wishing for… this on national TV.

You’re a creep bro. If you’re this easy w/ sexual harassment on air, how are you treating your staff? https://t.co/RFbOIRSmxQ

Alleging that Carlson shouldn’t be left alone with women, she also referred to the Fox News host as “basura,” the Spanish word for garbage.

This tweet came before Carlson had even finished his broadcast Friday night. Having had previous ‘bouts‘ with him following his on-air comments, one might begin to wonder if Ocasio-Cortez is a fan of the program. Or perhaps, Carlson is spot on in signaling her narcissism, and AOC can’t help but watch herself on television, no matter whose program she appears on.