Tulsi Gabbard Has HEATED Debate With Hannity Over Ukraine! [VIDEO] 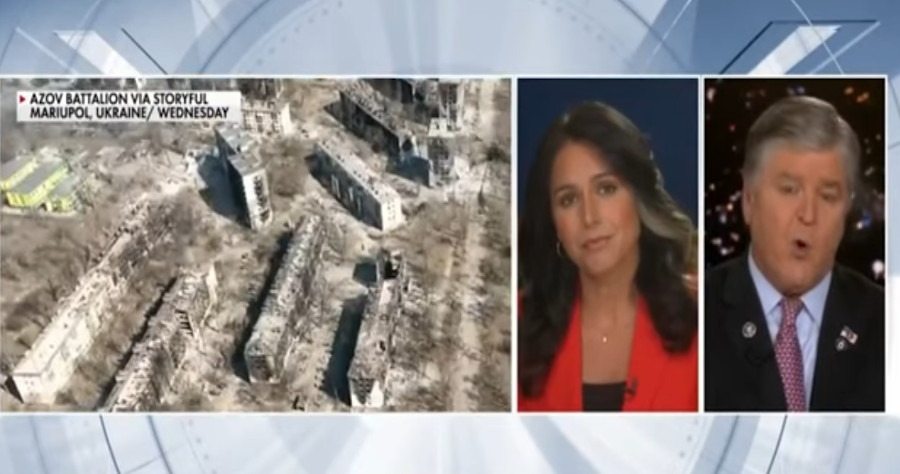 Sean Hannity pressed former Hawaii Congresswoman Tulsi Gabbard on her stance on the war in Ukraine Thursday, saying he is a supporter of the Reagan and Trump doctrines.
Gabbard, a 2020 presidential candidate and U.S. military reservist, said the Ukrainians cannot win their unwitting war against the Kremlin and its autocrat Vladimir Putin, while Hannity maintained that the West has a responsibility – though not through direct troop involvement – to supply victimized nations with assistance.

“I am a supporter of the Reagan Doctrine and the Trump Doctrine. The Reagan Doctrine was [borne out through] providing Stinger missiles to the Mujahideen when the Soviets invaded in the 80s — they were successful. They pushed the Soviets out, supporting the Nicaraguan freedom-fighting Contras over the Sandinistas and [dictator] Daniel Ortega,” he said.

“I’m also a supporter of the Trump Doctrine, which is bomb the living hell out of people [and] don’t put American boots on the ground.”
Hannity added that he and Gabbard agree that the U.S.’ job is not to be “world policemen” but commented that he otherwise disagreed with much of her stance.

“All the things that you just talked about and explained there, frankly, are tactics,” Gabbard replied. “Those are tactics to accomplish what and the ‘what’ is really the central question here that needs to be answered — what is our objective? What is the objective of the United States?”

“What actions and objectives best serves the interests of the American people? That’s the question. That’s the thing that that President Biden and his administration has failed to detail, outline or even identify.”

Gabbard said that because Biden didn’t lay out a clear plan to deal with the situation, he is now in Belgium “trying to clean up that mess” and those he otherwise helped accentuate, which she said included food shortages and other repercussions of his Russia sanctions package.

“Any time you look at so many of our foreign policy disasters in the past, we see they have come about because our leaders have failed to outline what is it exactly we are trying to achieve and how does it best serve the interests of the American people,” she said.

“You’ve got to know what we’re trying to accomplish, which is an end to this war,” Gabbard later continued. “It is cruel to make the Ukrainian people believe that somehow they are going to win this war by prolonging it.”