Tulsi Gabbard shares details of shocking ousting with Tucker: ‘Why did no one question Hillary Clinton?’ [VIDEO] 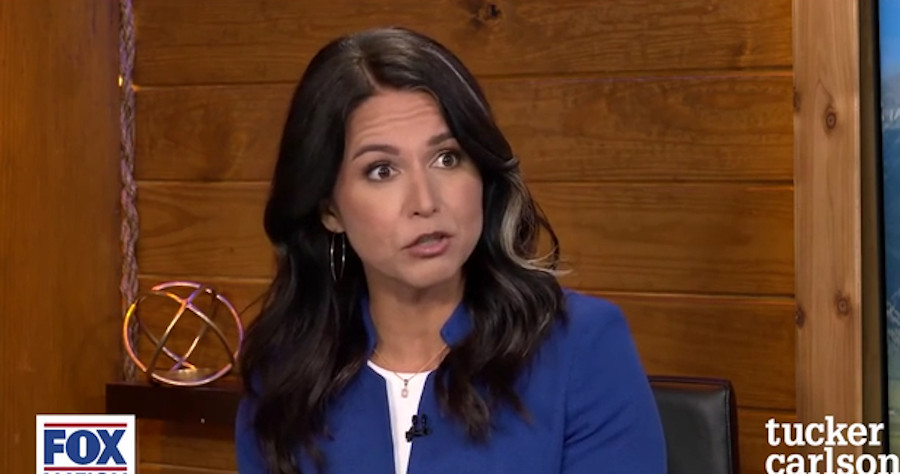 Former presidential candidate Tulsi Gabbard sat down with Fox News host Tucker Carlson and explained why she is an outcast in the Democratic Party, going from the most promising member in the House of Representatives to accusations of being a Russian spy in seven years.

Former Secretary of State Hillary Clinton and a number of other Democrats have bluntly asserted that Gabbard is a Russian spy and no one has really called them out for it. Carlson and Gabbard did so on Fox Nation’s “Tucker Carlson Today.”

“You went from the number one most promising Democrat in the House of Representatives to being a traitor to your own country… a Russian spy. What the hell, in seven years? How did that happen?” Carlson explosively asked Gabbard in the opening of the segment.

“That’s a great question. I think it points to, in all seriousness, the kind of the culture in Washington, where it’s the team spirit. It’s either you’re on our team or you’re not. You’re either towing the party line or the company line, or you’re not. And if you dare to challenge, if you dare to question, if you dare to speak the truth about what’s happening, about the challenges we face, I think that’s where you see that kind of shift occur,” Gabbard commented.

“Shift?” Tucker exclaimed. “With your signature understatement, yes, a shift! I mean, I’ve never seen anything like that!”

“But you know Tucker, obviously, you’ve lived and been around DC forever. You know what a popularity contest it is. Both within the political circles, but also in the media circles where, rather than people actually focusing on their responsibilities to the public, to the people, if you’re an elected official, to be their voice, to serve their interests and put their interests and our country first. Or from a media perspective, as a journalist, to always put the truth and presenting the truth to the people as kind of that paramount responsibility you have,” she continued.

In defiance of the Constitution, we now have leaders working with their mouthpieces in the mainstream media and big tech doing exactly what our Founders rejected. Watch full speech -> https://t.co/vpfh9BvkgZ pic.twitter.com/PIkIJC6lY8

“On both of those fronts, you and I know very well that that is not the acceptable culture in Washington because if you do those things and you go against the grain of what people view as cool or what the narrative of the day is that is dictated by the power elite, both within politics and mainstream media, then immediately, you become an outcast. You become otherized. You become smeared or even silenced and censored in this age of cancel-culture. And I’ve had better than front row seats to this. I’ve obviously lived it and experienced it,” Gabbard stated.

This power elite operation to crush freedom of speech IS the enemy attack from within – it threatens the very core of our democratic republic. It’s a complete betrayal of the vision of the American Founders, and a direct attack on… pic.twitter.com/7JMoOpY5f5

In direct opposition to the Constitution, the Power Elite suppresses voices, opinions, & information they don’t like. Those who dare to question ‘the authority’ are accused of spreading misinformation and targeted, smeared, silenced. Full speech -> https://t.co/vpfh9BvkgZ pic.twitter.com/DmFaL78WnC

“They literally accuse you of betraying the country you currently serve in uniform,” Carlson pointed out. It’s the heaviest possible charge. In fact, if proven, it’s a death penalty offense. So that’s a very strong thing for the head of the party to say. Maybe this is why nobody disobeys.”

“Yes, and not only do they not disobey, they… through all of uh… from the point that Hillary Clinton said that, which by the way, this whole thing started the very day I announced my candidacy to run for president. It started the very day I announced my race. And it was never questioned. There wasn’t a single journalist who said, ‘Well, Hillary Clinton,’ or any other of the kind of talking heads representing that…” Gabbard asserted.

“Downstream from her,” Carlson interjected.

“Exactly, and everybody got the talking points because it proliferated very quickly. No one questioned like where is your evidence of this? You’re talking about a sitting member of Congress, on the Armed Services Committee, with access to some of the highest level of security classified information related to our country’s national security, someone who wears our country’s uniform, has put her life on the line for our country and you’re making the most serious accusation one could make. Where’s the proof?” she concluded.