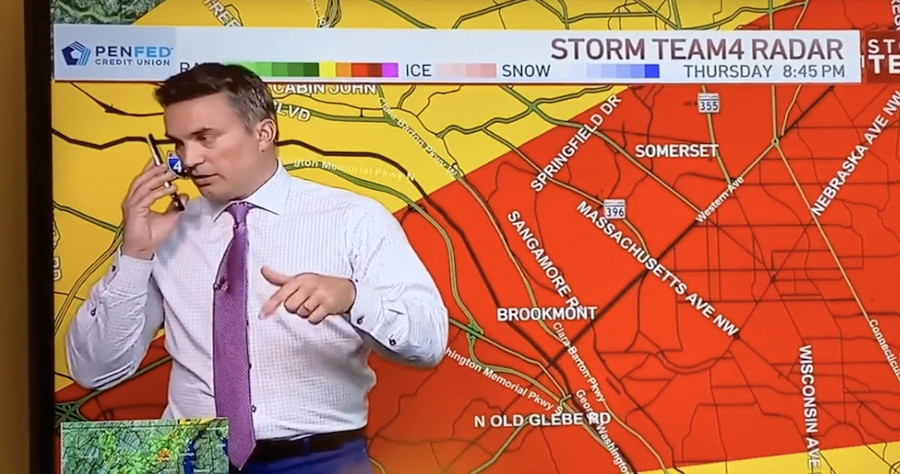 A Washington D.C. weatherman is basking in the re-gale of social media for calmly calling his kids on air to warn them to shelter immediately from a tornado.

“Get downstairs as soon as you can, OK?” NBC Washington chief meteorologist Doug Kammerer says calmly into a cellphone while the cameras rolled during a Thursday night weather report.

“Yeah, get down there right now. Get in the bedroom down there. And just kind of wait for like 10-15 minutes. OK? Do it now. Alright. Thanks, buddy.”

He posted the video of the call on Twitter. The on-air map behind him showed the path of the tornado heading right over his family’s home when he quickly phoned home.

“Gotta warn my kids. Because I know what my kids are doing now. They’re probably online gaming and they’re not seeing this,” Kammerer told viewers as he turned back to the camera.

“I was freaking out inside a bit,” he said later in the Twitter post, though his fear never showed on air. “They are safe. Thank you! Scary moment for me though.”

Viewers hailed the diligent weatherdad as a hero.

“Absolute respect! Glad your kids are safe, and thanks for all that you do to help keep our community safe!” gushed @_socialcat.

“You did the right stuff. Our families come first,” posted James B. Creel Jr.

“That’s how you know it’s serious weather when your meteorologist is calling his kids,” noted @MitchellAHorton.

“We have had tornado warnings before, but I was always able to text my wife or call them off-air,” Kammerer told AccuWeather.

“This was the first time I had to make the call live. My wife was not home, so my kids were home alone and I knew they would not be paying attention. Fortunately, we were all safe and no one was injured by this tornado.”