Unhinged Whoopi Lectures San Francisco Archbishop Over Pelosi Communion Denial: ‘That Is Not Up to You to Make That Decision’ 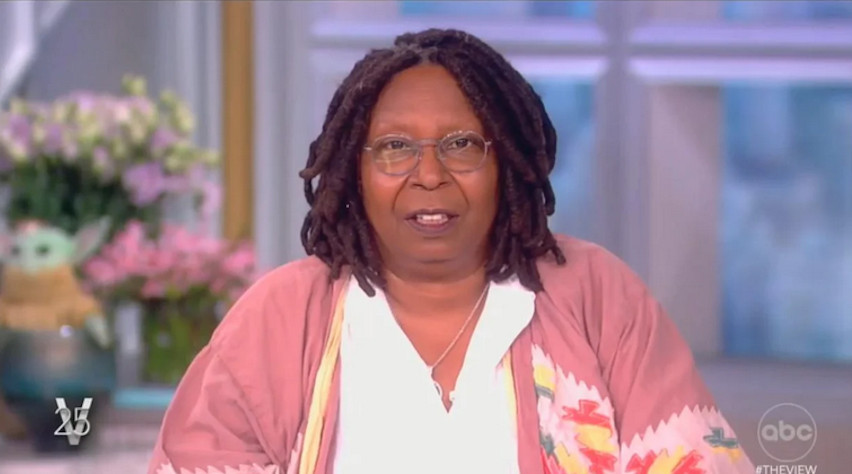 Whoopi Goldberg, co-host of “The View,” lectured the Catholic archbishop of San Francisco on Monday about what is and is not his job after he announced that House Speaker Nancy Pelosi is to be denied Holy Communion in his archdiocese because of her support for abortion rights.

“The abortion rights battle is starting to blur the lines between church and state. The archbishop of San Francisco is calling for Speaker Nancy Pelosi to be denied receiving communion because of her pro-choice stance. He’s one of the priests who also called president Biden to be denied sacrament,” Goldberg said at the beginning of the segment.

“This is not your job, dude!” she furiously exclaimed. “That is not, you can’t, that is not up to you to make that decision.”

“How dare you,” she said to Archbishop Salvatore J. Cordileone, who on Friday announced that he informed Pelosi she would not be admitted to Holy Communion after she resisted pastoral counsel on her support for abortion rights “for too long.”

In a letter to the priests of his archdiocese, Cordileone explained that he had attempted to meet and speak with Pelosi several times in the months leading up to his decision. He wrote that according to canon law, Pelosi is “obstinately persevering in manifest grave sin” and that it is his responsibility as archbishop — literally his job — to enforce church discipline against her.

The co-hosts of “The View,” several of whom were either raised as or are practicing Catholics, accused the Catholic Church of “hypocrisy” for neglecting to condemn politicians like Texas Gov. Greg Abbott (R), who support the death penalty in contradiction to Catholic social teaching.

“The Catholic Church has lost 20% in attendance since the year 2000,” said Ana Navarro, who went on to argue that church doctrine on controversial social issues is responsible for declining believers.

“Why? Because they’re against artificial birth control. They are against in vitro fertilization. They won’t give you communion if you are divorced or if you are a gay couple, and because of things like this, and in the meantime, if they really want to protect children, they have tallied 17,000 at least complaints of molestations by priests since the year 1980,” Navarro continued.

“So if you want to protect children, archbishop, instead of sheltering pedophilia, you know, pedophile priests, instead of moving them to other churches without telling the community, instead of protecting them, you should be protecting the children who go get Catholic education in your churches,” she said.

Joy Behar interjected to say that only 4% of priests are “bad priests,” defending the majority as not being child abusers.

Sunny Hostin then gave her take that Catholics should not “politicize” their religion.

“While I believe that abortion is wrong, and I believe that the catechism of the Catholic Church that pro-life extends from conception through natural death. If you are a practicing Catholic as Bill Barr is, as Greg Abbott is — then you should be pro-life from conception through natural death,” she said, referring to former Attorney General Bill Barr.

“And, the issue that I have with these politicians politicizing their religion is the hypocrisy, because when you look at the Catholic church, and these bishops, the death penalty, you know, so this includes the death penalty, right?” Hostin continued.

“When Bill Barr was the AG, he was honored for his service by the Church at the National Catholic Prayer Breakfast, and that included an address from the twice-divorced president at the time,” she said, adding that the Church was hypocritical for being friendly toward former President Donald Trump too (Trump is not a practicing Catholic).

“And Greg Abbott is another Catholic who is a proponent of the death penalty. There’s also the Second Amendment. If you are truly a pro-life Catholic, then you have to support gun reform. So you have to be consistent, and the church is just not consistent.,” Hostin asserted.

“Yes, and Bill Barr actually, under his watch, the federal government execute prisoners for the first time since 2003,” Hostin said. “Why are they weaponizing the sacrament against Nancy Pelosi, but not Bill Barr and other people the same way?”

But the archbishop spoke to her point in his letter.

“There are those who speak of such actions as I am taking as ‘weaponizing’ the Eucharist,” Cordileone wrote. “However, this is simply application of Church teaching. One would have to demonstrate that a person’s actions in following Church teaching is explicitly for a political purpose in order to justify the accusation of ‘weaponizing’ the Eucharist. I have been very clear all along, in both my words and my actions, that my motive is pastoral, not political.”

“I also hasten to point out that one can also violate Church teaching and take Holy Communion for a political purpose as well, thus ‘weaponizing’ the Eucharist for one’s own ulterior motives,” he added.

As for Abbott and Barr, they are not under the San Francisco archbishop’s authority, but Pelosi is.