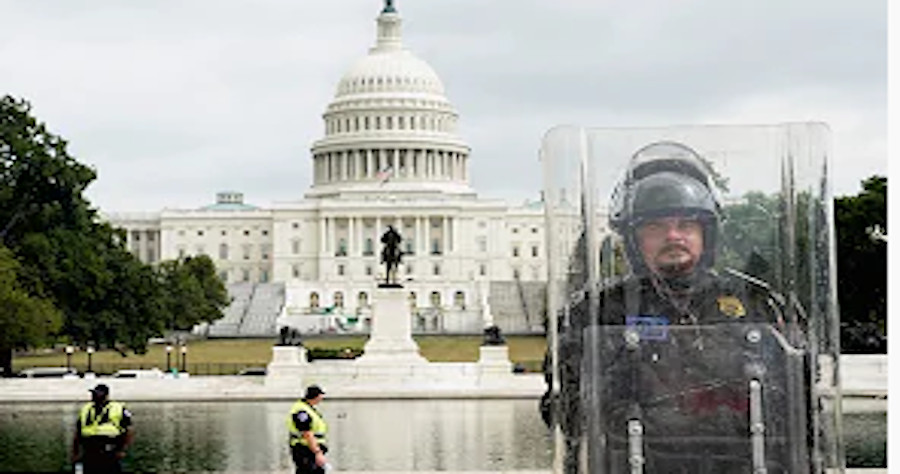 The U.S. Capitol Police (USCP) say that law enforcement agencies in the nation’s capital are planning “extra security” ahead of President Joe Biden’s first State of the Union (SOTU) Address scheduled for March 1, while citing plans by truck convoys to arrive around the same time.

“Law enforcement agencies across the National Capital Region are aware of plans for a series of truck convoys arriving in Washington, D.C., around the time of the State of the Union,” the USCP said in a press release on Friday titled “USCP Plans for Extra Security Ahead of the Joint Session of Congress.’

“As with any demonstration, the USCP will facilitate lawful First Amendment activity,” the agency said.

“The USCP is closely coordinating with local, state, and federal law enforcement agencies, including D.C.’s Metropolitan Police Department, the United States Park Police, the United States Secret Service, and other allied agencies to include the D.C. National Guard.”

A joint session of Congress is required to be held when Biden delivers his SOTU address.

The USCP added that it has been working closely together with the U.S. Secret Service “to plan for the upcoming State of the Union.”

The Epoch Times previously reported on Feb. 17 that a trucker convoy, which goes by the name “The People’s Convoy,” is set to head to Washington, D.C., to protest against the federal government’s emergency powers declared since March 2020.

Biden on Feb. 18 said he will extend the emergency powers beyond March 1.

While announcing the extra security measures, the USCP clarified that it has yet to decide on whether to reinstall a fence around the U.S. capitol.

“The temporary inner-perimeter fence is part of those ongoing discussions and remains an option, however at this time, no decision has been made,” it clarified in an update later on Friday. The added statement was “to address numerous inquiries we have received this evening,” the USCP said.

Army Maj. Aaron Thacker, a National Guard Bureau spokesman, confirmed to Breitbart News on Feb. 19 that the Metropolitan Police Department of the District of Columbia (MPD) had issued a request to assist, and the request is awaiting approval by Defense Secretary Lloyd Austin.

The MPD told The Epoch Times in an emailed statement that the department “is aware of potential First Amendment activities that may take place in the National Capital Region, including Washington, DC.”

“At this time, a permit application has not been submitted to MPD. As with all First Amendment demonstrations, MPD will be monitoring, assessing and planning accordingly with our local, state, and federal partners. We have increased available resources, including the activation of our Civil Disturbance Units, in preparation for these activities.”

The D.C. National Guard did not immediately respond to a request for comment.

Earlier this month, the U.S. Department of Homeland Security confirmed to The Epoch Times it was tracking potential truck convoys in the United States.

“We have not observed specific calls for violence within the United States associated with this convoy, and are working closely with our federal, state, and local partners to continuously assess the threat environment and keep our communities safe,” an agency spokesperson told The Epoch Times.