US producer prices increased 10% in February from a year ago 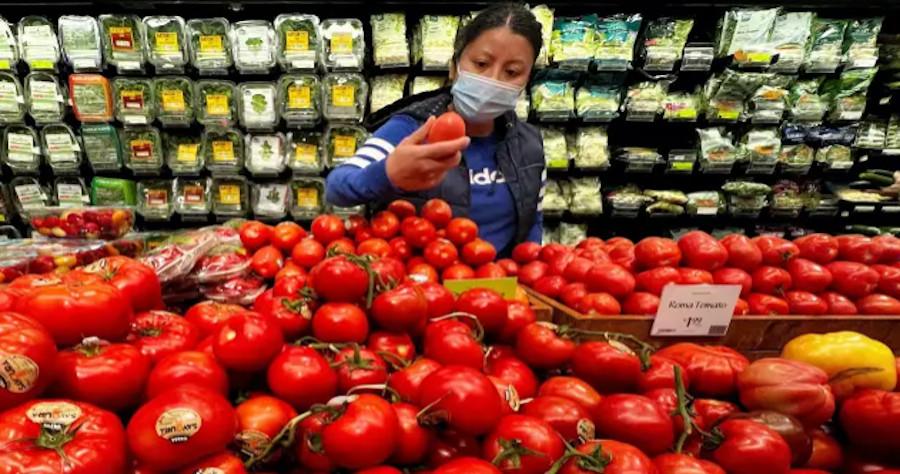 Prices paid to U.S. producers rose strongly in February on higher costs of goods, underscoring inflationary pressures that set the stage for a Federal Reserve rate hike this week.

The producer price index for final demand increased 10% from February of last year and 0.8% from the prior month, Labor Department data showed Tuesday. That followed an upwardly revised 1.2% monthly gain in January.

The data reflect the biggest monthly gain in the price of goods in data back to 2009, with two-thirds of the increase due to energy.

The median forecasts in a Bloomberg survey of economists called for a 10% year-over-year increase and a 0.9% monthly advance.

The data reflect the biggest monthly gain in the price of goods in data back to 2009, with two-thirds of the increase due to energy. Food prices were also up. It’s the latest indication of rapid inflation in the U.S., and prices are poised to accelerate further after Russia’s invasion of Ukraine sent prices of some raw materials to new highs. 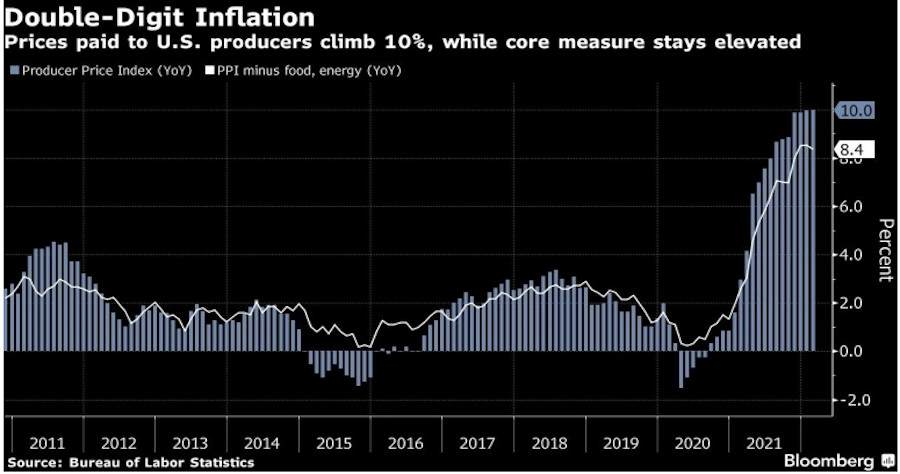 While that bolsters the case for the Fed to be aggressive in tamping down inflation in the coming months, the central bank will have to balance curbing inflation without stifling economic growth.

The Fed will have the latest inflation data in hand for its meeting that concludes Wednesday, when policy makers are widely expected to increase interest rates for the first time since 2018. Along with the decision, the Fed will release updated forecasts for inflation and growth.

The data suggest persistent inflationary pressures in production will filter through to consumer prices, which rose in February at the fastest pace in 40 years, in part due to higher gasoline, food and housing costs. That’ll only worsen given the war, and China’s lockdown of Shenzhen — one of the nation’s most populous cities and a technology hub — is expected to disrupt fragile supply chains even more.

Excluding the volatile food and energy components, the so-called core PPI increased 0.2% from a month earlier and was up by a 8.4% from a year ago, both missing estimates.

There were signs in other parts of the economy that inflationary pressures were cooling. Prices for final demand services were little changed from January, the first month without an increase since December 2020.

An increase in transportation and warehousing services costs was offset by declines in portfolio management and apparel and accessories retailing. The report captures changes in prices paid to producers as well as margins received by wholesalers and retailers.

A separate report Tuesday showed prices received by New York state manufacturers advanced to the highest in data back to 2001, while a measure of input costs stayed elevated.

Producer prices excluding food, energy, and trade services — a measure often preferred by economists because it strips out the most volatile components — rose 0.2% from January. Compared with a year earlier, the gauge decelerated.

Costs of processed goods for intermediate demand, which reflect prices earlier in the production pipeline, increased 1.6% from a month earlier, over 40% of which can be attributed to a rise in the price of diesel fuel. Compared with a year earlier, the measure was up 23.3%.