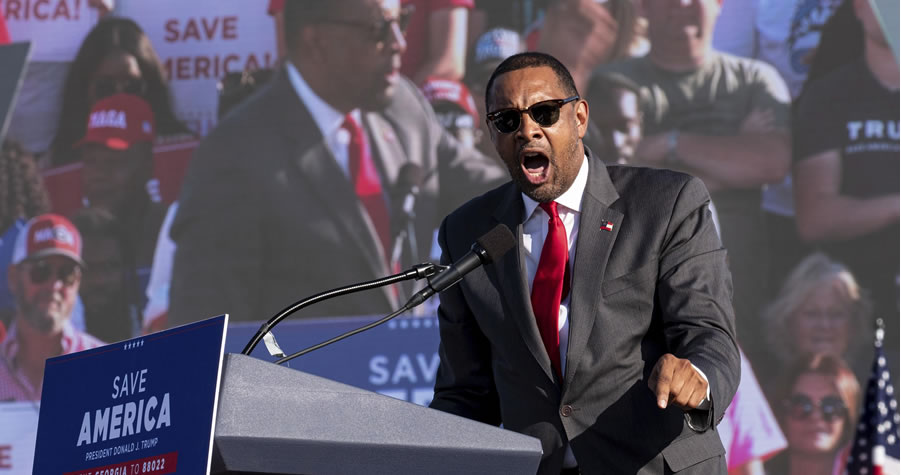 Ahead of the Juneteenth anniversary of the emancipation of U.S. slaves, former state Rep. Vernon Jones, a conservative Democrat-turned-Republican running for Congress in Georgia, called out Democrats for their historical support of slavery, while recognizing the role of Republicans who sacrificed their lives to end the institution.

In a video posted to Twitter on Saturday marking Juneteenth, Jones called on voters to “go out” to vote and “take back the country” in his congressional runoff this week, before highlighting the role of Democrats and Republicans in the history of slavery in the U.S.

“I had to pause for the cause because right now as we are about to celebrate Juneteenth,” he began in the slightly-over-one minute clip which garnered over thirty thousand views as of Sunday morning.

“I’m reminded that Juneteenth was brought about because of what Democrats did to black people, enslaving black people, when it was Republicans that freed the black people,” he added.

As we talk about Juneteenth, let’s not neglect to mention that the reason slaves had to be FREED is because the Democrat Party enslaved them. pic.twitter.com/IQAXgmM5Ny

He continued by calling out the false narrative surrounding Democrat and Republican roles concerning slavery typically promoted on Juneteenth.

“And so, ironically, when they teach about Juneteenth, we don’t hear anything about [how] the Democrats were the ones who wanted slavery, and they tried to protect and secure and keep slavery,” he said.

“But it was Republicans who got out, fought, [and] died to free the slaves,” he added.

Arguing that liberals “don’t want — especially black people — to know that,” Jones called for youth to be educated about the truth behind political support for and opposition to slavery.

President Joe Biden signed Juneteenth into law on Thursday as a federal public holiday — but President Donald Trump had proposed doing so last year, as part of his “Platinum Plan” for black Americans. https://t.co/qCO1UwV8vt