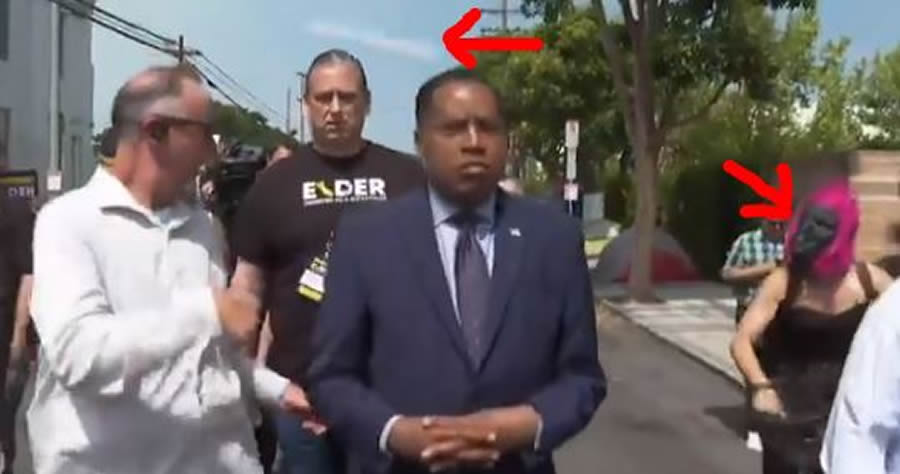 In a video posted on Disclose.tv’s Twitter feed, Republican running for California Gov Larry Elder appears to get attacked. Although the person misses in the video, a person in a gorilla mask tries to throw an egg at his head.

Elder is running to replace Democrat Governor Gavin Newsom in the recall election coming up. Elder is a Republican. Although it is possible, it’s not looking good for Elder in our view.

In the video, Elder is being heckled by a person that appears to be a woman. The person with the gorilla mask punches one man in the face twice it appears.

Elder and his entourage appear mostly safe but it is disturbing to see this happen. A man in a blue mask yells about Elder running, asking why he’s even running. He says Democrats control everything and even if Elder won he wouldn’t get anything done, according to the man.

A white woman in a gorilla mask threw an egg at Larry Elder, who is seeking to become the first black governor of California. Doesn’t seem very tolerant and inclusive to me. pic.twitter.com/zKjEHeNqS3

His attacker wears a monkey mask while the others call his staff “boy”. Then what looks like a reporter laughs. Then a man screams “DEMOCRATS RUN EVERYTHING!”

Breaking: A flying egg narrowly missed the back of recall candidate @larryelder's head after it was thrown by an activist wearing a gorilla mask in Venice. A scuffle broke out and the candidate was escorted into an SUV.

Here’s a psychotic lunatic in a gorilla mask throwing an egg at @larryelder then punching a security officer.

So a white person put on a gorilla mask to attack a black man. Guess who they are calling a racist though… https://t.co/RhOXpxOQJ0

Imagine the outage if Larry Elder was a Democrat.