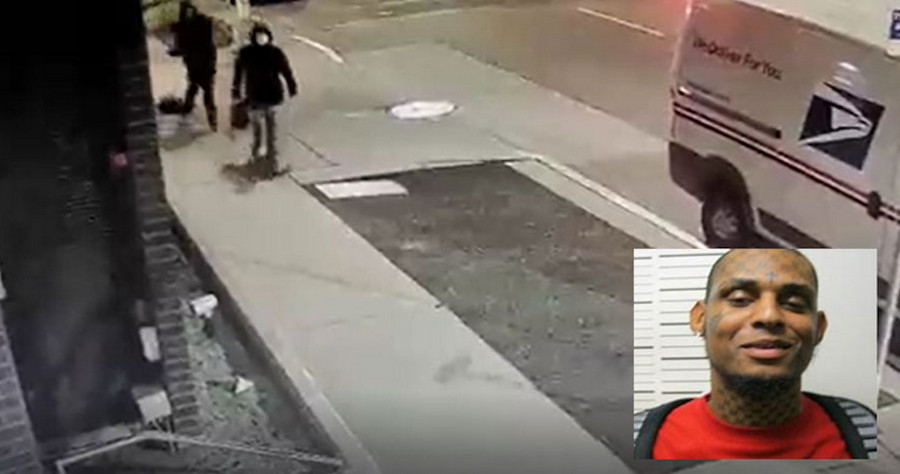 On Jan. 31, police say he randomly attacked an Amazon employee, hitting her in the head with a baseball bat from behind in Belltown. After the attack, police say Tulloss got a slice of pizza.

The brutal beating briefly knocked the woman unconscious. When police arrived, they saw her bleeding out of one ear. She suffered multiple skull fractures and will face “significant surgery” to repair the damage, according to court documents.

Local media are choosing not to report an important detail: Tulloss appears to be a homeless man. He is currently living in transitional housing and was arrested after an officer saw the suspect with his case manager.

Wantez Tulloss, a prolific offender, is accused of hitting this random woman in the head with a bat. He takes a full swing. She’s now suffering skull fractures that require significant surgery. He got a slice of pizza after the attack.

This is what Seattle has become. pic.twitter.com/dc8yJ8TAqP

Tulloss was living in supportive housing with few rules

According to the police report, Tulloss lives in a complex maintained by Plymouth Housing.

Plymouth Housing provides permanent supportive housing services for homeless individuals. It’s part of the Housing First strategy where the homeless are given homes with no conditions before being provided wraparound services to address the underlying causes of their homelessness.

And at Plymouth Housing, they approach their work using a harm reduction model for the residents who are drug addicts. According to its website, Plymouth Housing creates a “nonjudgmental space” for its residents “to make changes if, and when, they are ready.”

These types of housing programs, which are purposefully placed in densely populated neighborhoods, often take in dangerous felons. They pose a significant danger to the community, but activists, politicians, and media members shame you for pointing this out. You’re supposed to mimic Plymouth Housing workers and be nonjudgmental towards drug-addicted, criminal homeless people. Perhaps it’s why media outlets here ignored this detail.

Homeless? You wouldn’t know it from the media coverage

Neither KING 5 nor KIRO 7 TV identifies him Tulloss as homeless, nor living in a homeless program. KOMO and FOX 13 pass up on that detail, too. They cite the very same court documents my report uses, but they leave out this important detail.

Tulloss’ status at Plymouth Housing is important because it is yet another example of how the Housing First model fails so many people. Homeless people weren’t born homeless; something got them to that point. And with a criminal history like this, simply giving Tulloss a judgment-free studio apartment to live in forever isn’t going to serve him. How am I so certain? Because he’s currently in jail facing first-degree assault.

Seattle activists and politicians, enabled by tepid media outlets staffed with far-left partisans masquerading as journalists, won’t call out the role homelessness plays in the city’s crime surge. They think if they were to do that, it would be casting aspersions against all homeless people. This line of thinking doesn’t stop them from labeling all white men in MAGA hats as white supremacists, of course.

This is him. KOMO-TV pulled his mug shot from a previous arrest. pic.twitter.com/JjqVCnRTc2

The label is important

Not all homeless people are criminals, but a lot of them are. And if we don’t label the problem, we won’t find the right solutions.

Homeless people need help, and we can offer it. But that help often must start with drug or mental health treatment, not a nice apartment where they can suffer alone in a room, or crash after taking a bat to the back of the head of an unsuspecting victim.

Is Tulloss an addict or mentally ill? I have no idea. But free housing isn’t helping.

Too few in Seattle angle for solutions to homelessness. I suspect many enjoy the human suffering they can take photos of, then post to their Instagram with a sad face emoji writing about how sad it is that these people live on the streets. Tomorrow, they declare, they will bring the homeless a treat to lighten their day. It’ll come with a selfie to prove their community service. #Hero

But this city is also full of people who don’t think the homeless should be punished for most crimes. They’re “crimes of poverty,” they ignorantly claim.

When Seattle City Attorney Ann Davison announced she’s changing policy to make charging decisions against all of the accused within five days, City Councilmember Andrew Lewis whined that this isn’t the solution.

The Seattle Times noted that Lewis “fears that repeat offenders who are habitually prosecuted for more minor crimes will continue to offend.” They’re reoffending now, but Lewis doesn’t care about the small businesses ruined by their criminal behavior. And he doesn’t seem to care about the threat they pose to women walking alone at 6 p.m. on a Monday evening.

So what’s the solution? Activists and those in charge want permanent free housing because “housing is a human right.” Kind of like the permanent housing Tulloss was living in before he allegedly nearly killed a woman with a bat to the head. Great solution.