WATCH: Middle School Counselors Deliver Vile Message to Parents Over Their Objections To Indoctrinating Their Children: “A, B, C, D, E, F-you!” [VIDEO] 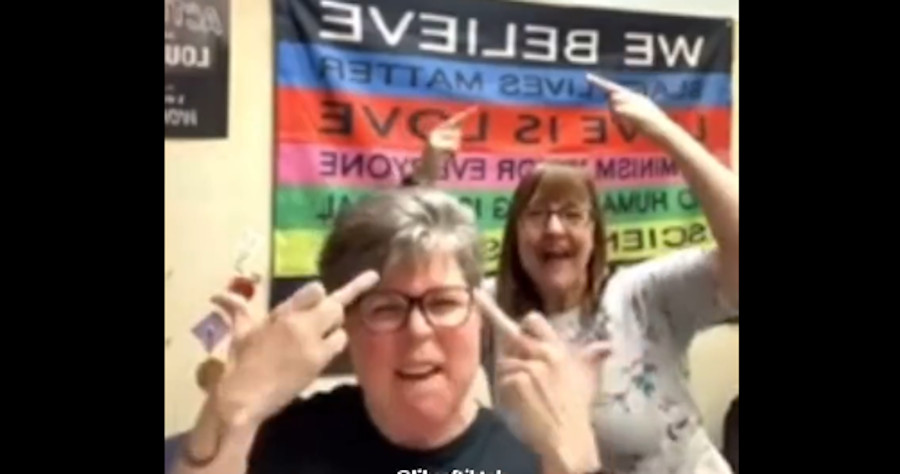 Two middle school guidance counselors have been placed on leave after making a very unprofessional TikTok video in which they were flipping off the camera in what appears to have been directed at the parents who supported the removal of political flags in the school’s classrooms.

After the Oregon middle school banned political flags from their classrooms, including Pride and Black Lives Matter flags, guidance counselors Annie Bynum and Erin Dobias filmed themselves lipsyncing to a song that goes “F*** you and your mom and your sister and your job and your broke-a** car and that sh** you call art.”

Also included in the video of the counselors singing to this song and flipping off the camera was a quote reading “I don’t think that flag should be [allowed] in the schools”, which made it very obvious that the women were directing their message towards the parents and school board who ruled to remove the political flags.

“We don’t pay our teachers to push their political views on students, that is not their place,” Newberg School Board Vice-Chair Brian Shannon said about the new policy. “Their place is to teach the approved curriculum, and that is all this policy does is ensure that that is happening in our schools.”

The controversial TikTok video was filmed in one of the middle school’s classrooms in front of a Pride flag that said “We believe Black lives matter, love is love, feminism is for everyone, no human being is illegal, science is real” and, funnily enough, the last line on the flag says “Be kind to all.”

The counselors’ TikTok account, @crazybulldogs333, has since been made private.

After an Oregon school banned Pride & BLM flags, these 2 middle school counselors responded with this TikTok.

They have since been placed on leave. pic.twitter.com/TW5bSmeEaw

The Newberg School District posted a statement on their Facebook page regarding the TikTok video, admitting that the “language, gestures, and tone such as what was on display in the video are unprofessional and highly offensive.” They make it very clear that they do not condone this type of behavior from their faculty, especially on school property, and announce that the two employees have been placed on administrative leave.