Watch this activist say mothers should be able to abort children after birth – even at 2-yrs-old! 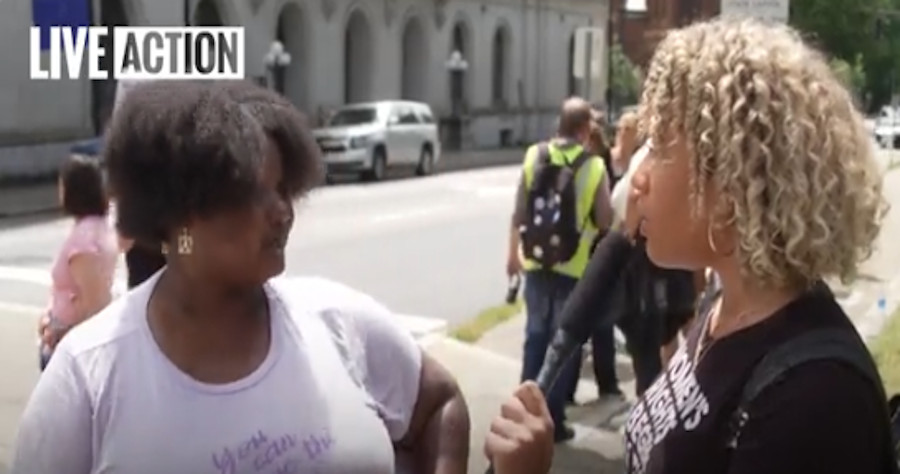 Live Action, a pro-life advocacy group, interviewed a pro-abortion advocate on the street and asked her if a woman should be allowed to abort a child after giving birth and she adamantly stated it was always the woman’s right to choose to kill a child.

“Do you believe in abortion after birth?” the interviewer asked the unidentified woman.

“I believe in whatever the woman wants to choose to do, that’s her choice,” the woman replied.

“At any point of the child’s life?” the interviewer asked.

“At any point of the lady’s life. That’s her choice,” the woman reiterated.

WATCH: Pro-Abortion activist says mothers should be able to abort children after birth: “It’s going to always be her choice.”

“To kill another person’s body?” the interviewer continued.

“It’s gonna always be her choice,” the woman responded.

“Even after the baby’s born?” the interviewer pressed.

“So, if they’re two years old?” the interviewer grilled the woman.

“It’s always her choice,” the woman doubled down.

“I can kill my two-year-old,” the interviewer asked incredulously.

“It’s a woman’s right to choose,” the woman stated.

“To kill their child at any point?” the interviewer questioned the woman.

“It’s the woman’s right to choose,” the unidentified woman repeated.

People were shocked and repulsed by the woman’s answers to the questions.

“Okay I’m pro choice but this is literally insanity wtf,” one woman wrote on Twitter.
In one interesting and rather disturbing exchange, a man tweeted, “It’s not called abortion when the child is born y’all are just playing the word game now.”

“It’s not semantics, in California and Maryland bills have been introduced that would let a child be ‘aborted’ up to 28 days after birth,” commenter Brian Bailie Jr. replied leaving out that killing a child after birth is actually called murder.

It’s not called abortion when the child is born y’all are just playing the word game now.

Another commenter was incensed by the woman’s remarks, “INSANE. They think it’s ok to murder their child at any age 1, 2, 3… when exactly did it change from ‘my body my choice’ to it’s always the woman’s choice. Hello… it’s not your body!!”
“I guess the slippery slope thing is freaking alive and well, INSANE,” another person wrote.

“Literal ‘I brought you into this world I can take you out,’” another commenter snarked.

“😂😂 god this world needs help,” one person pointed out.

“And unfortunately these people become parents at some point and do not value life. Parenting is a major concern when life isn’t valued,” another contended.

And one person asked the obvious in regard to the woman’s viral comments that echoed a seemingly long-held leftist belief, “Is she trying to justify parents murdering their kids after birth??”