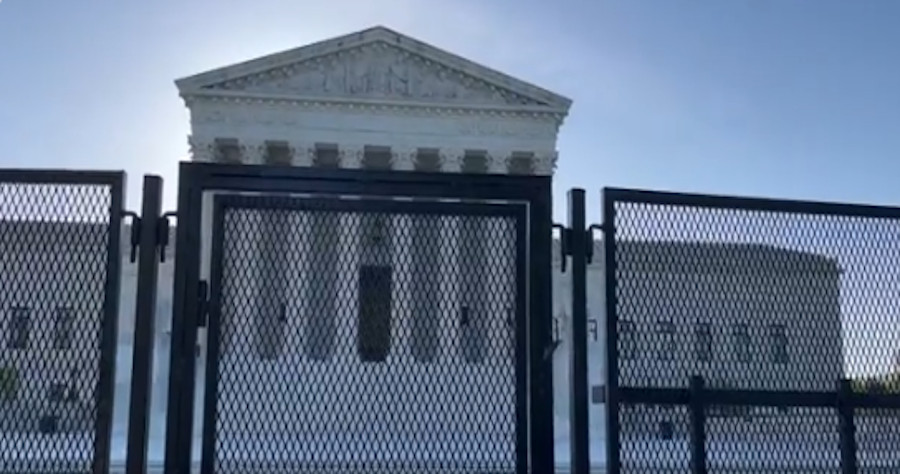 Following Monday’s leak of a draft opinion from the Supreme Court suggesting that a majority of the Justices would vote to overturn Roe v Wade, the nation’s highest court has received an upgrade in security fencing amidst protests.

The short crowd control barriers that were placed around the Supreme Court just hours after Politico published the leaked draft have now been replaced by taller non-scalable fencing, which were installed overnight into Wednesday morning.

BREAKING: Workers have begun putting up taller fences around the Supreme Court pic.twitter.com/f8ZkuWrESn

These fences were the same seen most prominently around the US Capitol building for over six months after the January 6 riot, and have been re-installed on numerous occasions since their summer 2021 removal from the grounds.

Fencing now surrounds the U.S. Supreme Court following protests and the leak of the draft decision that could overturn Roe v. Wade. pic.twitter.com/654yZgtuEJ

The same night these fences were installed, Justice Samuel Alito, the author of the leaked draft opinion, cancelled his appearance at the 5th US Circuit Court of Appeals’ judicial conference. According to Reuters, his reasoning for cancelling has not been disclosed.

According to a program obtained by Reuters, Chief Justice John Roberts and Justice Clarence Thomas are scheduled to speak at the 11th Circuit Judicial Conference in Georgia, though it is unclear whether they will still attend.

On Tuesday morning, Roberts confirmed that the leaked document is in fact authentic, but stressed that it does not reflect a final decision from he court. According to Fox News, the draft document in the case Dobbs v. Jackson Women’s Health Organization dates back to February.

The leaked document sparked protests across the country, with some gathering at the Supreme Court almost immediately after the document was published.