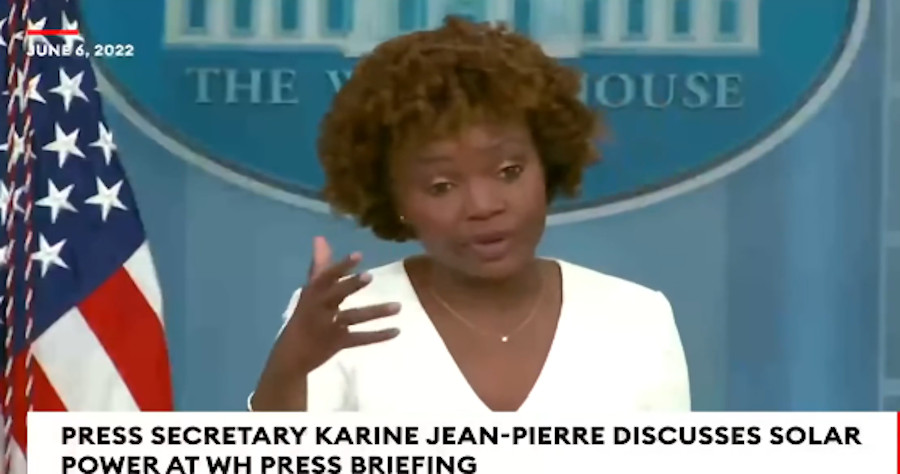 Fox News White House correspondent Jacqui Heinrich grilled the White House spokeswoman over Biden’s move and called it “a gift to Chinese solar manufacturers” who “operate with forced labor and are subsidized by the Chinese Communist Party.”

“So, you know, today’s announcement is about one country and one country alone, and it’s about the United States,” Jean-Pierre deflected.

“It is about the reliability of our power — of our power grid. It is about reducing costs for American families, and it’s about enabling domestic solar manufacturers to move forward with their projects,” she demurred, appearing to once again read from a prepared script.

Joe Biden importing Chinese solar panels while crusading against domestic oil and gas is a slap in the face of the American people.

Chinese solar panels aren’t going to lower the price at the pump.

“The actions that we’re — we are currently doing is being applauded by members of Congress, by labor, by climate groups, by U.S. CEOs, and domestic solar manufacturers as well,” Jean-Pierre haltingly replied, not bothering to mention that Americans seem to not be applauding the move at all.

“The — the actions do not apply to any materials imported from China. Import duties will remain in place on solar cells and panels from China or Taiwan. So it has nothing to do with either; it’s about making sure that we’re delivering for the American public,” she stumbled making a statement that many contend is blatantly false in what appears to be a push to institute the left’s agenda on climate change.

She said Biden “is putting the full force of the federal government’s purchasing power behind supporting American clean energy manufacturers, and he is providing U.S. solar employers the short term stability they need to build clean energy projects and deliver more affordable energy.”
Biden is taking so-called action to bolster clean energy during yet another burgeoning crisis at home. An energy emergency that is ostensibly self-inflicted following the president halting gas and coal production, while unrealistically demanding that Americans go green.

The text of the president’s declaration lists countries where certain import duties will be lifted. The countries are in Southeast Asia and do not include China. However, it should be noted that Biden is allegedly considering lifting sanctions on China which would negate the press secretary’s claims and protestations.

A White House fact sheet explains, “Temporarily facilitating U.S. solar deployers’ ability to source solar modules and cells from Cambodia, Malaysia, Thailand, and Vietnam by providing that those components can be imported free of certain duties for 24 months in order to ensure the U.S. has access to a sufficient supply of solar modules to meet electricity generation needs while domestic manufacturing scales up.”
“The president’s announcement will rejuvenate the construction and domestic manufacturing of solar power by restoring predictability and business certainty that the Department of Commerce’s flawed inquiry has disrupted,” Heather Zichal, who is the CEO of the American Clean Power Association and a former Obama administration official, said in a statement on Monday regarding a solar power inquiry by the government, according to the Honolulu Civil Beat.

Abigail Ross Hopper, who is the president and CEO of the Solar Energy Industries Association, cheered Biden’s “thoughtful approach to addressing the current crisis of the paralyzed solar supply chain,” the media outlet noted.

“Today’s actions protect existing solar jobs, will lead to increased employment in the solar industry, and foster a robust solar manufacturing base here at home,” Ross Hopper noted in a statement.

U.S. Rep. Byron Donalds (R-Fla.) tweeted, “Biden’s irresponsible & arguably constitutionally corrupt misuse of the Defense Production Act should concern every American. The DPA isn’t a get out of jail free card to cover for lazy & inept governance, which is exactly how this administration uses it. @POTUS is a failure.”
Rep. Chris Stewart (R-Utah) also questioned Biden’s priorities, writing, “Can’t find baby formula for your newborn? Can’t afford to fill up your gas tank? Don’t worry, @POTUS will have new solar panels ready in no time…”