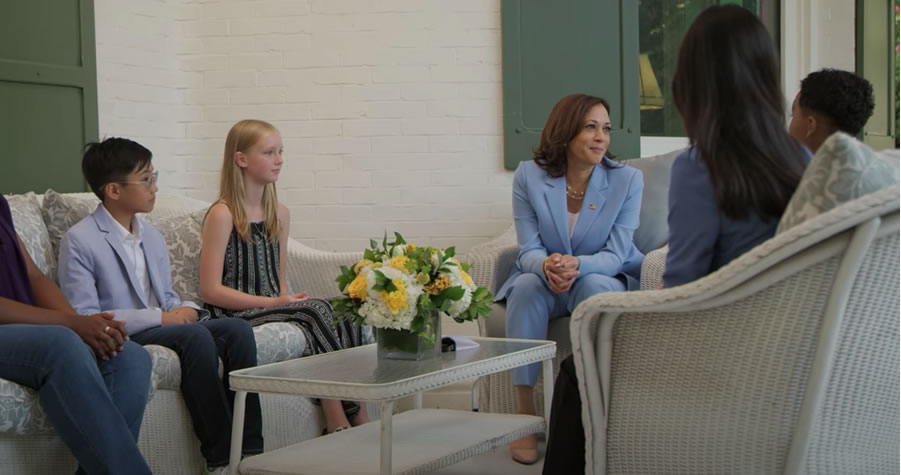 A video meant to sell children on the wonders of space exploration featured Vice President Kamala Harris giving a memorably loopy performance alongside a quintet of child actors who auditioned for their roles, it was revealed Monday.

“All five of them are actors,” Carlo Bernardino, whose 13-year-old son Trevor was one of the youngsters taking part, told the Washington Examiner. “He’s a child actor — he’s been trying to do this type of thing for a while. And so he has a manager and an agent in LA and they send him castings.”

Trevor Bernardino told KSBW that he was asked to submit a monologue about a topic he is passionate about, as well as three questions he wanted to ask a world leader. The next step was a virtual interview with the producer of the video, the first in a YouTube Originals series called “Get Curious with Vice President Harris.”

“Then after that, like a week later my agent called me and was like, ‘Hey Trevor, you booked it,’” the teen recalled.

What the hell did I just watch? pic.twitter.com/mj6cM2wDIr

Just when you thought it couldn’t get phonier, the Washington Examiner is reporting that some of the kids in the video were actors who auditioned:

"The first installment of Vice President Kamala Harris’s YouTube Originals space series featured child actors who auditioned for their roles in the project."https://t.co/cmcoKqOcH3

everything is totally normal! pic.twitter.com/K5u4GaalmC

This explains so much. Give those kids an Emmy for not cracking up in her face for how she was speaking to them. Great acting, kids. https://t.co/2eUTEhuukQ