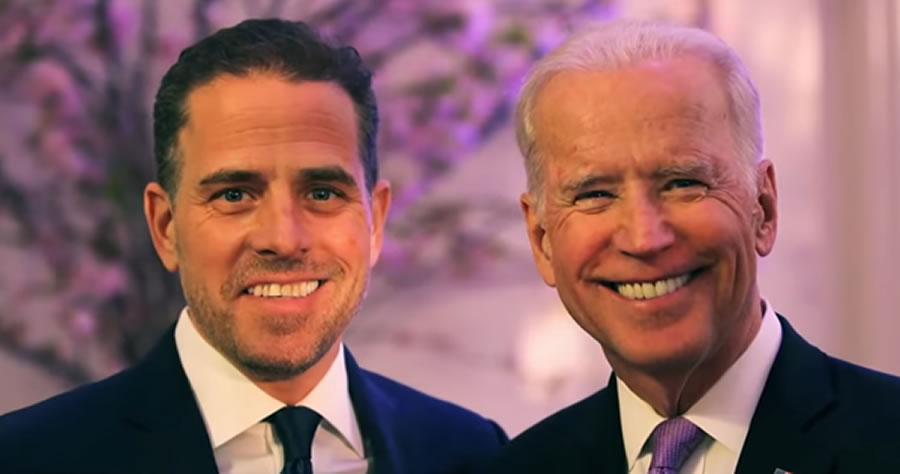 The walls appear to be closing in on Hunter Biden and by extension “Pops,” aka “the Big Guy.” In another bombshell revelation, Republican Senators Ron Johnson (R-WI) and Chuck Grassley (R-Iowa) released bank receipts showing evidence that Hunter Biden had received payments from foreign oligarchs.

The release came after the New York Times finally admitted last week that the Hunter Biden laptop was not, in fact, a Russian disinformation campaign but that the laptop and its related information was legitimate. The latest document drop seems to confirm that Joe Biden is very likely “compromised.”

The documents released by Johnson and Grassley showed that CEFC China Energy, “an arm of the Chinese Government,” paid Wells Fargo Clearing Services the amount of $100,000 and designated “further credit to Owasco,” a law firm owned by Hunter Biden, The Federalist reported.

“There’s no middleman in this transaction. This is $100,000 from what is effectively an arm of the communist Chinese government direct to Hunter Biden,” Grassley said on the Senate floor on Monday. “To the liberal media and my Democratic colleagues: Is this official bank document Russian disinformation?”

“Bank records like this piece of evidence are pretty hard to deny and sweep under the rug. Our reports were chock full of irrefutable evidence like this. And yet, the media buried those details, in an attempt to keep it hidden from the American people,” Johnson added in his remarks before the Senate.

The payment occurred in 2004 when “the Big Guy”—Joe Biden—was the chairman of the Senate Foreign Relations Committee, Breitbart News reported.

CEFC, led by chairman and majority owner Ye Jianming, is no longer in business. A previous release by Breitbart reported:

Schweizer notes that “interest-free loans provide tremendous leverage because the lender can demand its money back if it is displeased by any action.”

In August 2017, CEFC Infrastructure Investment LLC sent Hunter Biden’s law firm, Owasco, $100,000. Four days later, the firm wired $5 million to another entity controlled by Ye, which then started sending regular payment to Owasco. Biden then transferred $1.4 million of that money to a firm called Lion Hall Group, which was controlled by his uncle James Biden, and his wife, Sara Biden.

In his Senate remarks, Grassley accused Hunter and James Biden of creating a scheme to profit from “the Big Guy’s” position in the American government.

“Hunter Biden and James Biden served as the perfect vehicle by which the communist Chinese government could gain in-roads here in the United States through CEFC and its affiliates,” Grassley continued.

“And these in-roads were focused on China’s advancement into the global and U.S. energy sector. Hunter and James Biden were more than happy to go along for the right price.”

Johnson agreed with Grassley’s analysis, suggesting that Democrats and the mainstream media “gaslit” the American people for years over the bogus Russia collusion hoax instead of focusing on where the true corruption lay—with the Biden family and China.

“Senior Democrats and the liberal media cooperated to smear me and Sen. Grassley with false accusations of receiving and spreading Russian disinformation,” Johnson said.

“They crafted documents, leaked them, asked for briefings, and leaked those too. And then, they themselves disseminated Russian disinformation.”

Johnson said he and Grassley were able to stay true to the government records that were available, as well as facts and evidence. And now they appear to be vindicated.