Whew! Candidate That Almost Beat DeSantis In 2018 May Now Be Headed To Prison 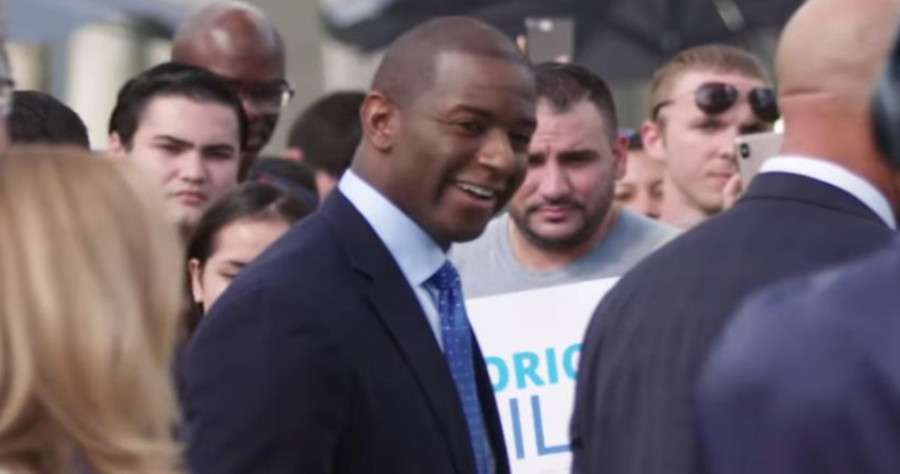 To paraphrase the great John Bradford, “There, but for the Grace of God, go we.”

Considering the high-profile status that Florida’s Republican Governor Ron DeSantis has achieved, it’s easy to forget that he almost lost his state’s gubernatorial election four years ago. He may be the front runner to succeed Donald Trump as the GOP’s presidential nominee during the next election cycle should Trump decide to sit it out, but in 2018 Governor DeSantis barely squeaked by the Democrats’ candidate, former Tallahassee Mayor Andrew Gillum.

Fortunately for Florida, and indeed for all Americans, DeSantis succeeded in defeating Gillum the last time around, even if it was by only 34,000 votes. Because, while Ron DeSantis appears headed to a landslide victory in November in his quest for a second gubernatorial term, Andrew Gillum may be headed to prison.

According to a report from the Miami Herald:

“Andrew Gillum, the former mayor of Tallahassee, … was indicted and arrested by federal authorities on Wednesday, according to court documents.

The 21-count indictment was unsealed Wednesday following his arrest. Gillum and his political adviser, Sharon Janet Lettman-Hicks, are charged with 19 counts of wire fraud and one count of conspiracy to commit wire fraud, with each count carrying a maximum of 20 years in prison. Gillum is also facing a count of making false statements to the FBI, which carries a maximum of five years in prison.

Federal prosecutors allege that Gillum and Lettman-Hicks diverted money from his political committee to pay Gillum directly, defrauding campaign mega-donors and other organizations that believed they were donating to legitimate political causes.”

Lest anyone conclude that Gillum is somehow the victim of some type of targeting by Governor DeSantis, please note that the charges against Gillum are coming from federal prosecutors. That means it is our Democratic President Joe Biden’s Justice Department that now has Gillum in their crosshairs. DeSantis has nothing to do with the investigation or the indictment.

The last thing any state needs – including Florida, obviously – is having more corrupt politicians in positions of power. If not for that aforementioned 34,000-vote margin four years ago, the Sunshine State would have had Andrew Gillum calling the shots, along with all the corrupt shenanigans of which we’ve since become aware. But Florida’s good fortune in electing DeSantis instead of Gillum isn’t limited simply to its avoidance of Gillum’s apparent venality, there’s also the issue of policy.

While Ron DeSantis has become arguably the top conservative voice in the country and has turned Florida into a destination to which freedom-loving conservatives in northeastern blue states are fleeing in record numbers, the damage that could have been caused by a Gillum governorship is scary to consider.

Andrew Gillum was a far-left candidate and would have undoubtedly governed as such; within the limitations of his legislature, of course. Fiscally, Gillum is a tax-and-spend liberal who would have been looking to drive up Florida’s debt in the name of ‘equity.’ Socially, as a candidate Gillum signaled his support for Black Lives Matter and came out as bisexual after losing the election, so we can safely assume he would have been highly woke on such issues, including the handling of the Walt Disney Company.

Perhaps most importantly, however, Andrew Gillum would have likely followed the lead of Democrats in blue states when it came to managing COVID, whereas Ron DeSantis established the absolute proper way to handle the situation. Note that Florida, despite having the second-oldest population in the country has performed far better than states such as New York, New Jersey, and Michigan in COVID deaths-per-million-population despite those Democrat-run states having far younger populaces. And also note that Florida didn’t destroy its economy along the way as those blue states did.

Not only would Andrew Gillum have been a corrupt governor, but he also would have been disastrous regarding policy. Indeed, there but for the Grace of God go we.