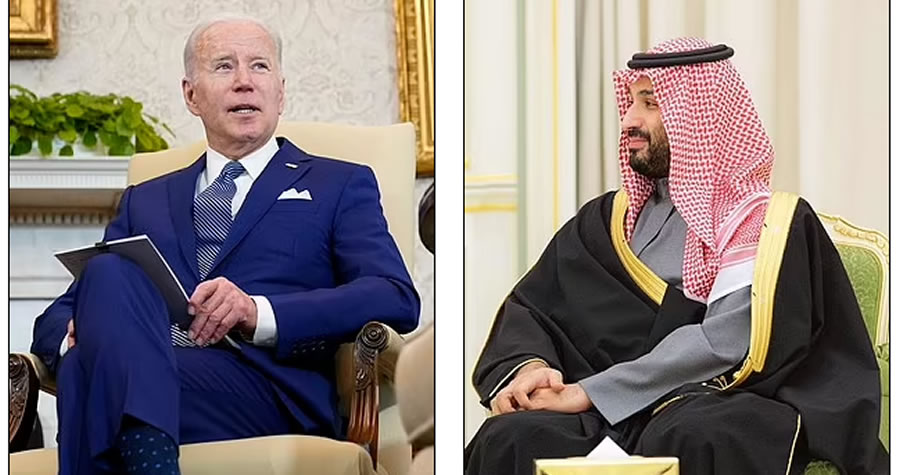 President Biden’s advisors are reportedly considering sending him to Saudi Arabia to push the kingdom to pump more oil as prices soar to over $130 a barrel.

As Russia invaded Ukraine, the U.S. and the rest of the world have imposed harsh sanctions on Moscow that have driven already-high gas prices to their highest in over a decade.

Speaker Nancy Pelosi said Sunday that the House is considering ‘strong legislation’ to ban Russian oil and energy products. Ukrainian President Volodymyr Zelensky implored U.S. lawmakers to do so during a call on Saturday.

Countries from Japan to the United States discussed banning Russian oil imports in response to the country’s invasion of Ukraine, fueling an 18 percent jump in crude oil on top of a 21 percent surge last week.

U.S. stock index futures slid on Monday, as the prospect of a ban briefly pushed oil above $130 a barrel and added to concerns over spiraling inflation and slowing economic growth.  At 8.41am, the Dow was down 214 points, or 0.64 percent. The S&P 500 dropped 0.55 percent and the Nasdaq lost 0.61 percent.

West Texas Intermediate and Brent crude both breached $130 per barrel for the first time since 2008. For every $10 increase in oil, the price of gasoline increases about 20 cents per gallon.

The U.S. imports about 700,000 barrels of crude oil and petroleum products per day from Russia,