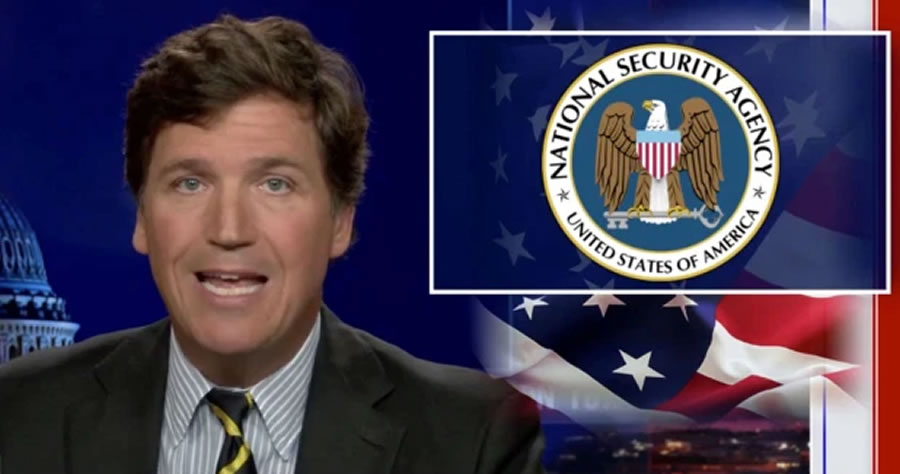 Fox News prime-time host Tucker Carlson claimed Wednesday that his identity was “unmasked” and illegally leaked to the media in retaliation for his attempts to score a sitdown with Russian President Vladimir Putin.

Carlson initially accused the National Security Agency (NSA) on June 28 of monitoring his emails in an effort to find damaging material that would force Fox to take his top-rated show, “Tucker Carlson Tonight,” off the air. That claim prompted a rare public denial from the agency, which stated that Carlson “has never been an intelligence target”.

Off the top of Wednesday’s show, Carlson said he had learned the previous day that “sources in the so-called intelligence community told at least one reporter in Washington what was in those emails, my emails.”

Carlson did not identify a reporter or outlet, but Axios’ Jonathan Swan reported earlier Wednesday that the host had reached out to “US-based Kremlin intermediaries” about a potential Putin interview in recent weeks. The story by Swan — an occasional guest on Fox News programs like “Special Report” — cited “sources familiar with the conversations.”

Carlson confirmed the Axios story, recounting: “Late this spring, I contacted a couple of people I thought could help us get an interview with Russian President Vladimir Putin. I told nobody I was doing this other than my executive producer, Justin Wells.

New: Tucker Carlson was talking to U.S.-based Kremlin intermediaries about setting up an interview with Putin shortly before he accused the NSA of spying on him. U.S. gov’t officials learned of this outreach … but that’s where details get cloudy. https://t.co/5kbjMJnQ2r

An NSA spokesman declined to comment and referred Axios back to the agency’s earlier, carefully-worded, statement. In other words, the NSA is denying the targeting of Carlson but is not denying that his communications may have been incidentally collected. https://t.co/puTyIEUTEi

I don’t suggest there’s anything wrong with this type of back-channel outreach. I often do it myself trying to get foreign leader interviews. I am trying to establish what actually happened at the collection end, and here I’ve reported what I could confirm so far.

IOW, the NSA was spying on Tucker Carlson. https://t.co/ubFIJJdhhO

According to the Axios article:

The first — and least likely — scenario is that the U.S. government submitted a request to the Foreign Intelligence Surveillance Court to monitor Carlson to protect national security. A more plausible scenario is that one of the people Carlson was talking to as an intermediary to help him get the Putin interview was under surveillance as a foreign agent.

In that scenario, Carlson’s emails or text messages could have been incidentally collected as part of monitoring this person, but Carlson’s identity would have been masked in any intelligence reports. In order to know that the texts and emails were Carlson’s, a U.S. government official would likely have to request his identity be unmasked, something that’s only permitted if the unmasking is necessary to understand the intelligence.

In a third scenario, interceptions might not have involved Carlson’s communications. The U.S. government routinely monitors the communications of people in Putin’s orbit, who may have been discussing the details of Carlson’s request for an interview.

But under this scenario, too, Carlson’s identity would have been masked in reports as part of his protections as a U.S. citizen, and unmasking would only be permitted if a U.S. government official requested that his identity be unmasked in order to understand the intelligence. And it’s not clear why that would be necessary here.

WHO UNMASKED @TuckerCarlson and leaked his emails? There is a crime in this chain of events.