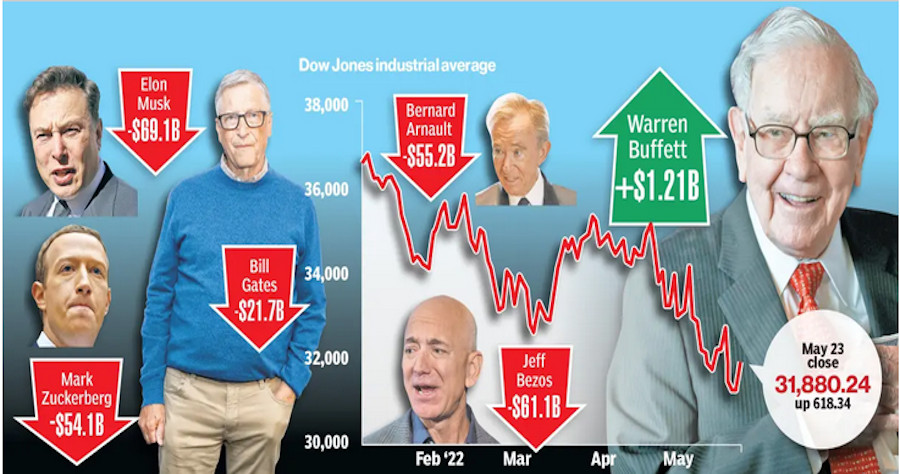 The 50 wealthiest people in the world have lost more than half a trillion dollars this year due to the tanking stock market, according to the latest figures compiled by Bloomberg Billionaires Index.

Musk, the world’s richest man who has temporarily put on hold his $44 billion acquisition of Twitter, has lost $69.1 billion — the most of any mogul on the list. He now has a net worth of $201 billion.

Bezos, the second richest man, stepped down as CEO of Amazon last year to focus on his space travel company Blue Origin. He has seen his net worth fall by $61.1 billion. His wealth is now valued at $131 billion.

Arnault’s net worth is $123 billion. The French billionaire, the third richest man in the world by virtue of his position as CEO of LVMH Moët Hennessy Louis Vuitton SE, has seen his wealth decline by $52.2 billion this year.

Gates, the software pioneer who left Microsoft to become a full-time philanthropist, is worth $116 billion. Since the start of 2022, his net worth has eroded by $21.7 billion.

Warren Buffett, the CEO of Berkshire Hathaway, is one of the few billionaires who has seen his net worth rise this year. Buffett’s wealth is valued at $110 billion — $1.2 billion more than where it was at the start of 2022.

Mark Zuckerberg, the Facebook founder, saw his fortune shrink by $54.1 billion. He is now worth an estimated $71.4 billion.

Former Microsoft CEO Steve Ballmer vaulted into the top 10 richest in the world despite losing $16 billion, leaving him at $89.6 billion – after Oracle chief Larry Ellison’s net worth fell to $89.2 billion from a $21.9 billion hit.

Also managing to make money amid the stock market turmoil was hedge fund king Ken Griffin. The Citadel Capital CEO has seen his net worth jump by $8.29 billion, to $29.6 billion, putting him 40th on the list.