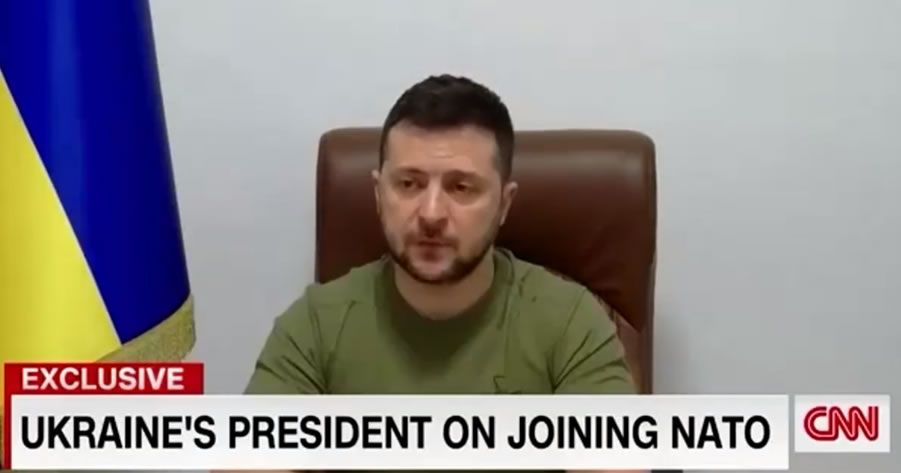 Hopefully by now everyone is well aware how the U.S. State Department has been manipulating the internal politics of Ukraine for well over a decade.

A recent statement, by current Ukraine President Volodymyr Zelenskyy, puts the weeks leading up to the Russian invasion into greater clarity.

In an interview with CNN, Zelenskyy spoke about his prior communication with Joe Biden and NATO leadership.  Within the interview Zelenskyy said (emphasis mine):

“I requested them personally to say directly that we are going to accept you into NATO in a year or two or five, just say it directly and clearly, or just say no,” Zelensky said. “And the response was very clear, you’re not going to be a NATO member, but publicly, the doors will remain open,” he said.  {CITATION)

So, privately NATO and the Biden administration were telling Zelenskyy Ukraine was never going to be in NATO, yet they told him they were going to publicly act like the possibility existed.  There was no way for Ukraine to enter NATO, but they were going to pretend he could.  Why would they do this?

Now we go back to the previous outline when it was first discovered the Biden administration was using China to funnel information to Russia.

In late February, the New York Times reported on U.S. intelligence and diplomatic officials from the State Dept sharing intelligence with Chinese officials in the three months leading up to the Russian invasion.  {Go Deep on Analysis} The narrative from the NYT article tells the story of the U.S. trying to convince China in December, January and February to intervene and persuade Russia not to cross the border into Ukraine.

Many people looked at this story from the perspective of incompetence, i.e. why would the Biden team think China would not share the intel, etc?

However, when it comes to these types of issues, never ascribe to incompetence that which can be explained by manipulative intent.

There’s every reason to believe what the Biden intelligence community and state department were sharing with China, was done with the intention of Beijing giving it to Moscow.

Now we get to the public story, public quote and critical Reuters article from December of 2021. What was being publicly outlined by Joe Biden to Ukraine President Vladimir Zelenskyy?

Biden and Zelenskiy had a call two days after Biden held talks with Russian President Vladimir Putin to try to defuse a crisis over Russian troop movements near Ukraine’s borders. (read more)

Behind closed doors NATO told us "NO" but publicly they said, "the doors will remain open" Many countries have financial and energy ties they cannot allowed to be threatened. pic.twitter.com/lCfUAxoQnq